On Sunday, 10/1/2017, in Room 2 on the 2nd Floor in the School, between the Masses and starting at 10:00AM sharp, we will show the acclaimed movie, The 13th Day.  We present this movie in celebration of the 100th Anniversary of the Fatima Miracle of the Sun, which will be on October 13, 2017.  This is the best of several movies about Fatima which will inspire you deepen your faith. 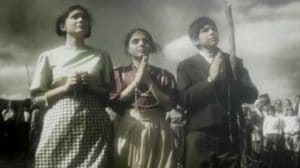 This movie is a dramatizes the true story of three young shepherds who experienced six apparitions of Our Lady between May and October 1917, which culminated in the final prophesied Miracle of the Sun on October 13.  Abducted from their homes, thrown into prison, and interrogated under the threat of death in the government’s attempt to silence them, the children remained true to their story about the crucial messages from Mary of prayer, repentance, and conversion for the world. 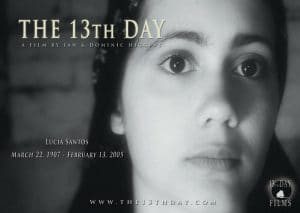 Our Lady gave a secret to the children told in three parts, from a harrowing vision of hell, to prophetic warnings of future events including the advent and timing of the Second World War, the spread of Communism, and the attempted assignation of the Pope.

In addition to this movie, the following week, Sunday October 8, 2017, between the masses, we will show the companion documentary, Finding Fatima, by the same directors.  While each of these films stands on its own, we encourage you to see both.  Together, they are even more powerful, compelling and inspirational.  They bring home the messages of Fatima which are as relevant today as they were 100 years ago.